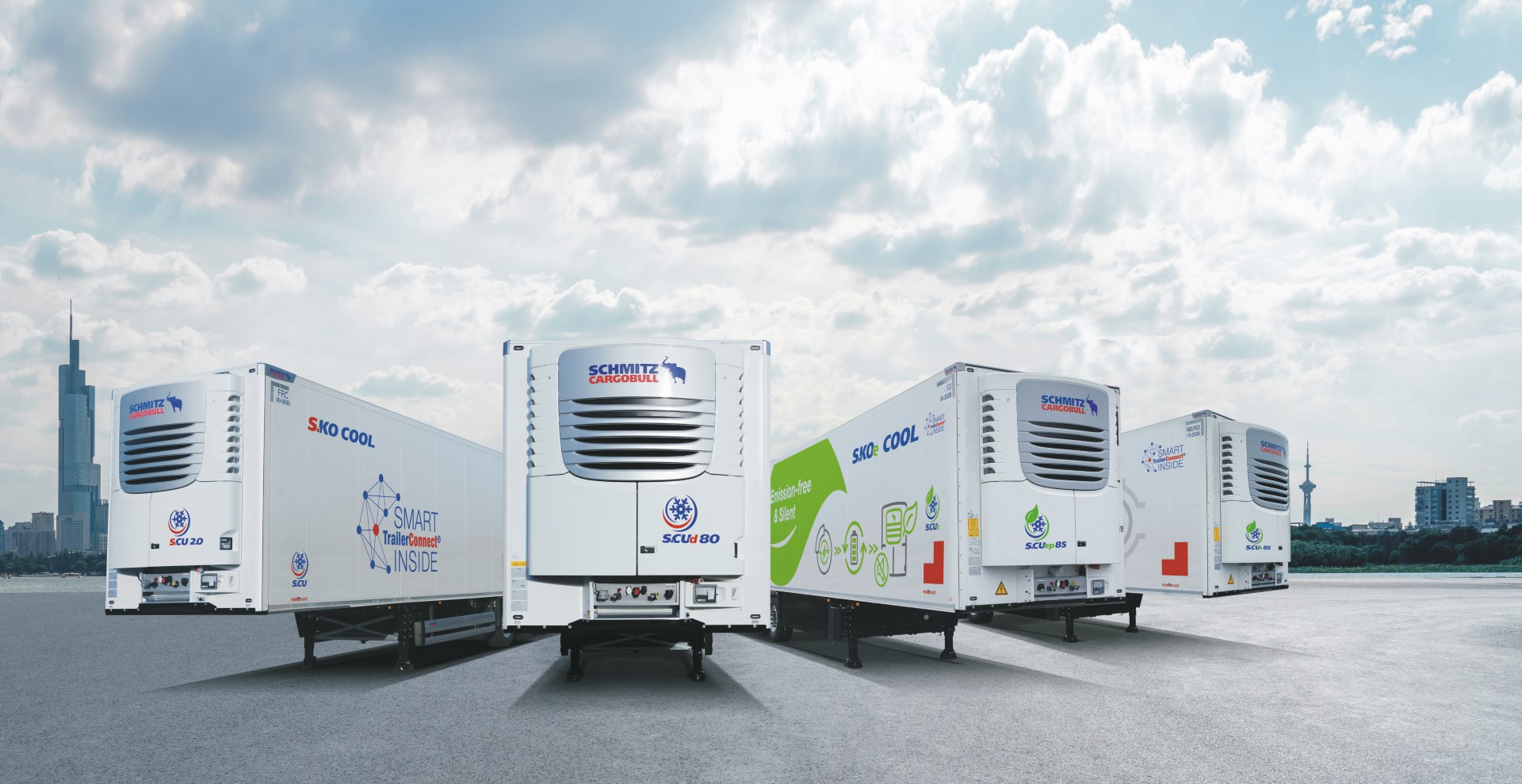 September 2022 – For more than 10 years, Schmitz Cargobull has been offering its own solutions in the field of transport cooling units with the S.CU (Semi-trailer Cooling Unit), which is optimally matched with the cooling bodies and the trailer telematics. Thanks to the S.CU modular system, it is possible to offer customers transport cooling units that are specifically tailored to their needs. The product range includes two diesel-powered units (S.CU d80 and S.CU 2.0) and two electric units (S.CU e85 and S.CU ep85).

Comfort for drivers plays an important role in times of driver shortages, which is why all S.CU cooling units come as standard with the silence kit for optimal noise reduction. What’s more, all S.CUs have a more intuitive menu navigation on the control unit. In addition to information about temperatures, all necessary smart trailer information, such as that concerning the door contact switch, is available in the S.CU display. Not only can the information be viewed, but thanks to 2-way communication it can also be actively controlled, e.g. setpoints.

At the IAA Transportation 2022, Schmitz Cargobull is taking the next trend-setting step towards the digitalisation and networking of transport logistics. In the past, setpoints, operating modes, and door locking could be set individually, but in future it will be possible to create preconfigured cargosets for the S.CU in the TrailerConnect® portal, and transfer them over-the-air to the transport cooling unit. The pre-configured operating modes ensure that for each and every refrigerated transport task, the transported goods always remain at the correct temperature. This is achieved by simply creating cargosets in the TrailerConnect® portal, direct transmitting these cargo sets ‘over-the-air’ to the cooling unit, and then the driver simply activating them via the S.CU display. The flexible selection of different operating modes avoids costly manual operating errors by drivers or site staff. In addition, this makes it possible to apply software updates directly and without a workshop visit, which increases the availability of the trailers.

The S.CU modular system is being refreshed. The S.CU d80 will replace the S.CU 1.0. The robust Perkins diesel engine will continue to be used in the S.CU d80, making it suitable for transports to countries with lower fuel quality.

The refrigeration circuit has been completely overhauled compared to the previous model, and designed to meet the requirements in the mid-range area. New features include a microchannel condenser and a scroll compressor. With the overhaul, the unit has a high cooling and heating capacity for the specific segment, and is characterised by lower consumption and quieter noise emission compared to the previous model. The S.CU d80 is only available in the MonoTemp version. It will be presented exclusively at the IAA Transportation 2022 and will be available for ordering from then on.

The battery-electric powered S.CU ep85 with power electronics operates locally emission-free and is specially designed for use in distribution transport. With 15,800 W cooling and 10,500 W heating capacity, it is equivalent to diesel-powered units.

The S.CU ep85 is part of the S.KOe COOL box body semi-trailer. With its battery capacity of 32 kWh, an average electrical operation of up to 4.5 hours can be ensured, depending on usage and requirements. Recharging from the power grid is done via the CEE three-phase connection installed on the cooling unit and takes about two hours. In addition, the all-electric S.KOe COOL is equipped with an electric generator axle that recuperates energy during braking and other processes, and thus reduces the recharging times of the battery via the power grid. This also minimises charging times at distribution centres. Intelligent control ensures that the charge level of the high-voltage battery is kept as high as possible to provide a high level of operational reliability for unplanned standstill situations, such as traffic jams, for example. The power of the electrified axle is specially adapted to the needs of the cooling unit. With the all-electric S.KOe COOL, Schmitz Cargobull has created the basis for ecological goods transport, thus enabling further CO2 reduction.

The purely electric operation of the S.CU ep85 is very quiet, which offers advantages in urban areas, especially for deliveries at night or in the early morning. The electric system also reduces maintenance costs, as there is no need to change the oil, for example.

Another advantage is that through integration into the overall vehicle, the power electronics can be protected in the cooling unit and are not exposed to the weather. In addition, the trailer only weighs around 80 kg more than a trailer with a conventional transport cooling unit. The S.CU ep85 is available in both MonoTemp and a MultiTemp variants.